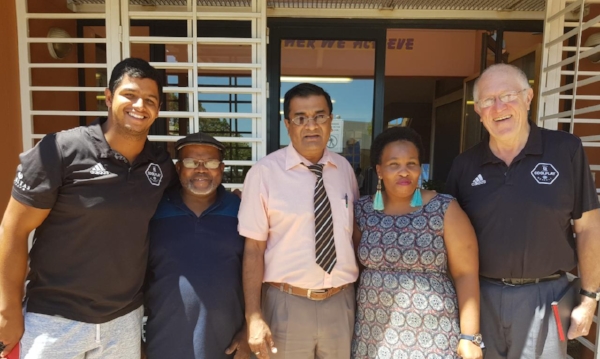 What difference has CoolPlay made to your school?

CoolPlay came to our school when we were experiencing serious problems with gang fighting. We made a decision to employee coaches for netball, soccer and rugby to try and counteract the scourge of gangsterism. However, we could only afford to pay these coaches a nominal salary. These coaches were also not trained coaches but rather ordinary individuals who were unemployed and very passionate about sport. CoolPlay stepped in and offered training for these coaches in sport and the teaching of life-skills through sport, and this was especially valuable since our objective with the after school programme was to effect a change in behaviour.

What effect has CoolPlay coaching had on kids in the classroom?

The most important thing about CoolPlay is its’ emphasis on combining sports coaching with life-skills training. Learners are constantly being told the meaning of good discipline, commitment and values such as respect. This has resulted in learners changing not only their behaviour but also their attitude to educators, non-teaching staff and their school mates.

What other benefits are there of an after school program like CoolPlay?

People may sometimes see sport and the academic programme of the school as two completely different entities, however this is utterly wrong as the skills used on the sports field such as listening, anticipation, momentum, effective communication and the values such as commitment and dedication are the very same skills and values required to succeed in the academic programme.

What would you say to other school Headmasters on adopting CoolPlay?

Under-performing schools focus a lot of energy on the academic programme and are able to take their matric pass results into the seventies and eighties. They then reach a plateau and struggle to rise further. It is adopting a programme such as CoolPlay which helps effect behavioural change, attitudinal change and the successes the learners enjoy on the field helps build their confidence which translates into them having a positive self image which ultimately helps them improve in the classroom